Philip Nitschke: WA dying laws will have to change for people like David Goodall

Veteran euthanasia advocate Philip Nitschke says WA’s laws will have to change so people like Dr Goodall, who was not suffering a terminal illness, won’t be forced to travel to Switzerland to die.

Veteran euthanasia campaigner Philip Nitschke has criticised WA’s draft voluntary assisted dying laws as too conservative, predicting the state government will immediately be under pressure to relax them if they make it through parliament.

In an exclusive interview with WAtoday, Dr Nitschke – the first doctor in the world to administer a lawful lethal voluntary injection when euthanasia was briefly legal in the Northern Territory – said WA’s laws would not have helped Perth academic David Goodall take his own life.

The 104-year-old made headlines around the world in 2018 when he flew to Switzerland to access euthanasia, even though he was not suffering a terminal illness. 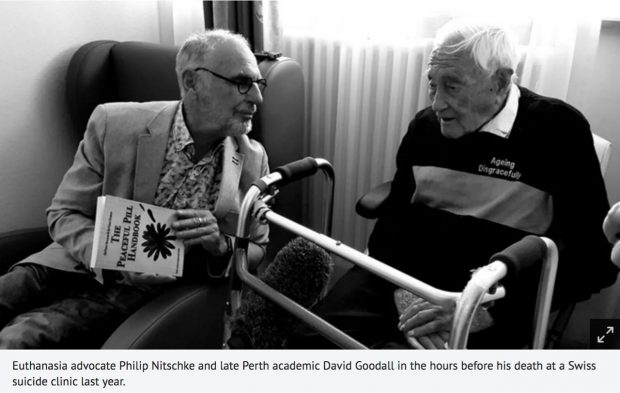 Dr Nitschke predicted there there would be increasing pressure from ageing populations who, like Dr Goodall, questioned why they need permission to die.

“It’s too restrictive and what will happen, we can predict this now with great certainty, is that you’ll see what’s played out in places like the Netherlands where I now live,” the former medical doctor said.

“Laws in the Netherlands came in in 2001 and almost immediately they were challenged by the onerous requirements that people had to try and satisfy.

Dr Nitschke’s decades-long euthanasia advocacy has been criticised by opponents and some supporters of voluntary assisted dying, but he remains one of the world’s most outspoken proponents.

After studying the draft WA laws, Dr Nitschke said they would be “very difficult to access by people who are in real need”.

“Now we’ve got relatively progressive legislation in the Netherlands and that’s what will happen in Western Australia when the laws do come in, and they certainly will, there’ll be immediately pressure saying, well hang on, why can’t I access the law at 16 if I’m terminally ill?” he said.

“And when are you suffering enough to qualify?”

I would hope that they should bring in something that looks more like the Swiss model where these people can be accommodated.

Psychiatrist David Kissane, a strident opponent of euthanasia legislation who co-authored a landmark report with Dr Nitschke into the deaths that occurred under the NT’s euthanasia laws, agreed there would be pressure to liberalise WA’s laws.

“This is but the beginning and the pressure will be on to relax the rules that are brought in to try and provide safeguards,” Professor Kissane said.

“We’ll see gradually the development of what happens in other countries, where in Canada there is now a debate about the mentally ill accessing euthanasia.

But Professor Kissane, the University of Notre Dame’s Chair of Palliative Medicine Research, disagreed with Dr Nitschke’s analysis of the WA bill as conservative.

He said it was an “incredibly liberal” bill and said the contention there were many safeguards was “a nonsense”, with people initially denied euthanasia under the laws able to get a second opinion or have a nurse practitioner inject them with a lethal substance.

Under the legislation currently before WA Parliament, Mr Goodall would not have been eligible for euthanasia.

“This whole idea of having to go off and seek permission is a bit of a fundamental issue that comes up as soon as laws are introduced,” Dr Nitschke said.

“You’ll see it under challenge and of course the question I keep coming back and reminding people about is David Goodall, who had to leave Perth to go to Switzerland to die because the Swiss have got probably the most progressive legislation in the world.

“Whereas he was effectively having to argue, or would have had to argue that he was sick enough to qualify and David just kept on insisting look, I’m 104 but I’m not sick and surely I’ve earnt the right to die at that age.”

Amendments to the WA euthanasia bill proposed by pro-voluntary assisted dying MP Tony Buti which would prevent doctors suggesting euthanasia to a patient were criticised by Dr Nitschke.

The safeguard, which is a part of Victoria’s euthanasia laws and is intended to protect vulnerable individuals including those living in remote Indigenous communities, was voted down by state government MPs even though it was supported by Aboriginal MP Josie Farrer.

“I think it brings in a whole stack of unnecessary concerns and anxieties, but to try and actually preclude it? I thought the Western Australian idea of not having such a provision was a step in the right direction,” Dr Nitschke said.

“I’d be very sad if they created a cross to bear which is effectively what the Victorians have done to themselves.”

Dr Nitschke said euthanasia opponents had exploited concerns about the vulnerability of Aboriginal people to the extent where the Northern Territory’s euthanasia law almost didn’t pass.

“The suggestion in the Northern Territory was the legislation was fundamentally racist because it would fundamentally discourage Aboriginal people from seeking any medical intervention because they’d be fearful that they’d be put down if they went near a medical clinic,” he said.

“And that line was actually used to very good effect by the opponents to the point where the law damn near floundered.”

The NT’s euthanasia law was in place from July 1996 to March 1997 when the Commonwealth Parliament over-ruled it, which it would not have the constitutional power to do if WA adopted the bill it is now debating.

Seven people made applications to die under the Northern Territory law, but only four ended their lives under the legislation, all assisted by Dr Nitschke.

Last month Dr Nitschke and his pro-euthanasia advocacy organisation Exit International held a forum in Perth, which was interrupted by a young woman who tried to question the doctor.

Debate is set to resume in the state’s Lower House on Tuesday.