This weekend, euthanasia campaigner Philip Nitschke will unveil his most ambitious death machine yet, the “Sarco”.

This weekend in Venice, the euthanasia campaigner Philip Nitschke will unveil his most ambitious death machine yet. The 3-D printed “Sarco” (short for sarcophagus) will use nitrogen to provide a quick and peaceful death to any adult of sound mind who wants one. It’s the culmination of a 20-year journey that began when Nitschke invented the “Deliverance” machine – a device that allowed patients to use their laptop to self-administer a lethal injection.

His organisation, Exit International, also provides information on other end-of-life methods. It has 50,000 members, and it’s “impossible to say how many [they’ve] helped to die – probably hundreds – but many subscriptions aren’t renewed”, according to Philip, who “gets emails every day saying someone they know has ‘taken the step'”. The emails are, he says, usually grateful.

By allowing anyone to order a high-tech death at the time of their choosing (as long as they pass an AI test to determine their mental capacity), Philip’s vision of death has a touch of Silicon Vally to it. It’s easy to imagine a future in which, once our young blood transfusions dry up and we’ve finished every VR level on the hospice’s PS12, the singularity shepherds us into the Sarco, where we’re whisked away to a painless death.

The ethical questions arise when you consider where to draw the line, and whether this version of death is a dangerous advertisement for the mentally ill, disabled and elderly. To his critics, Philip has created a kind of post-modern eugenics, where the weak choose to kill themselves. But for thousands of people who are suffering needlessly, the Sarco is techno-utopianism at its finest.

We’ve been filming Philip and his clandestine global network for the last four years for an upcoming VICE documentary. I caught up with him before his biggest-ever achievement was unveiled.

The “Sarco” in Venice. Photo via @philipnitschke 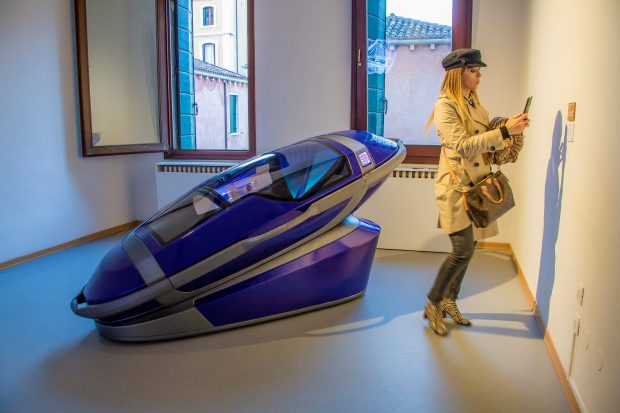 VICE: Let’s say I want to use the Sarco to die – describe to me what that experience would be like.

Philip Nitschke: This is a device that will offer a sense of style and elegance and allow you to mark the occasion of your death as an important event. The Sarco is portable, so you can be in a place where you want to have your last view of the planet.

Once you’ve passed a test determining that you’re of sound mind, you’ll be given a code which will allow you to access the Sarco. You’ll open the door, climb in and press the button. Within one minute, the oxygen levels will drop down to about 1 percent, causing euphoria and then death in four to five minutes.

Then, the biodegradable capsule would detach and lower into the earth, as your coffin. Your loved ones may be with you: you say goodbye and then take off. The death will be peaceful and reliable.

Are peacefulness and reliability important to someone wanting to die?

Yes. We often ask people who join Exit International what it is they want, and those are the two biggest criteria. People don’t want to jump off buildings or in front of trains. With the Sarco, you’re not going to survive.

Most people die first and then have a funeral, but it seems like you’re reversing that process.

If you feel like you want to go when your health is still good, you should be able to use the Sarco, and you can turn your final moment on this planet into an event. We’ve put a lot of effort into the idea of de-medicalising the process. You don’t have to be in the last stages of some terminal disease. The idea is that you’re closing the door and, in a symbolic way, saying, “I’m leaving, and you are staying.” The device also gives a sense of travel: you press the button and leave the planet to some uncertain destination. It looks like a vehicle.

But can you really upend a ritual that largely hasn’t changed in our society for thousands of years?

Well, there are a lot of things that have been disrupted about the way we live our lives in this century. It may be time for death to have a bit of a rewrite. The development of modern medicine means we’ve been able to keep people alive longer, but not with much quality in their lives. So we have a growing cohort of elderly people without terminal illnesses who don’t want to be here anymore – my mother was one of them.

Where do you draw the line over who gets to euthanise themselves? What about people with mental illnesses?

You can have mental illness and still have mental capacity. The real test is: “Do you know what you’re doing?” That’s the idea of the Sarco’s artificial intelligence test, which hasn’t yet been developed.

I imagine that’s a lot of people’s worst nightmare: that AI decides whether or not we die.

Well, I think some people will no doubt feel a little unnerved. Some of this futuristic thinking about death is what motivated me. The death scene from [the 1973 dystopian thriller] Soylent Green sticks in my mind: this idea of an elective, beautiful death that does what’s right for the planet. Those kind of views, in the context of global warming, have become more and more relevant. But, by and large, the idea that we shouldn’t be handing control of this most fundamental decision to the medical profession is what concerns me. Going, cup in hand, begging to doctors to let you die is not something that I want to happen.

What other options for end of life does Exit International help with?

There are a handful of drugs that will reliably end your life – the best is nembutal. We provide information on where to get it over the counter or on the dark web.

So my grandma could be using the dark web to look for end of life drugs?

Yep, she’s probably got the Tor browser open right now and is typing in her code name.

What are your next steps?

We are getting a lot of requests from people. We will soon be setting up in Switzerland, where we will provide the Sarco to people coming from other countries. But after that, the Sarco will become 3D printable, so anyone, anywhere, can use it.

So you’ll be able to subvert the laws of whatever country you live in, print a Sarco and euthanise yourself?

Yes. Suicide itself isn’t a crime in almost any country. It’s assisting suicide that’s a crime, and that’s why I can’t physically give you the machine in the UK because I’d be assisting you – though I can in Switzerland.

Many people in the UK agree with euthanasia as a last resort, but isn’t there a valid worry that an elegantly designed, sci-fi sarcophagus makes suicide more appealing to people who would otherwise be dissuaded?

I mean, if you really want to stop people ending their lives then you’ve got to create a world where people are universally happy – and we’ve been spectacularly unsuccessful at doing that. The commonest means that people use today in the UK is hanging, which is a grim and horrible death. I hope the Sarco deflects a lot of people who are otherwise going to end their lives violently.

But what about the people who would have been discouraged by that very violence?

It comes back to a fairly fundamental philosophical question. I believe suicide is a fundamental human right that the state has no moral right to interfere with.

What if elderly or disabled people, who already feel like they’re a burden, are pressured into using the Sarco if society gives them that option?

There will be people who think that nothing that makes suicide easier should exist. That’s not an uncommon view, but it’s not the only view. I’ll try and talk you out of it, and I’ll try to make your world a better place. But if you make this decision then I will do everything I can to make sure you have access to a Sarco.

What sort of backlash have you had?

There are people within the Right to Die movement who say the Sarco will make it more difficult to pass legislation that allows terminally ill people to get a medically assisted death. But it’s too late to hold this back – the Sarco is getting global publicity now.