Right to death should be personal choice, say Exit members

Not many people have seen what Jan Clifford has when it comes to terrible deaths.

During her 30-year career as a physiotherapist in intensive care, she saw hundreds of people die in ways they never would have wanted, given the choice.

Now that she’s nearing 70, Ms Clifford said it become even more important to her that she might have the choice of how and when to die when the time comes. 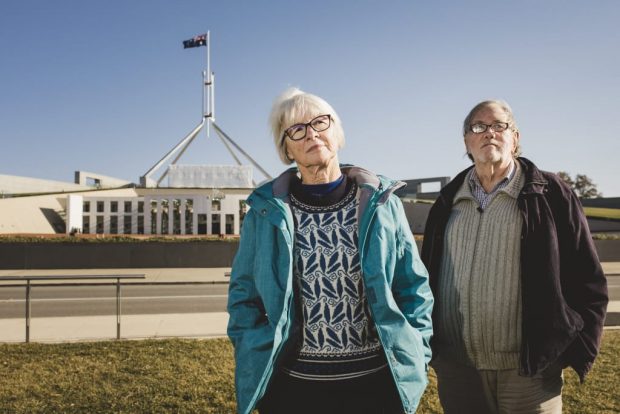 For the past 10 years she has been a member of the ACT chapter of Exit International, the international non-profit organisation advocating the legalisation of voluntary euthanasia and assisted suicide.

She joined a peaceful gathering on Tuesday at Parliament House, where the Senate was debating a private members’ bill from Liberal Democrats Senator David Leyonhjelm.

If passed, the bill would repeal the 21-year-old Andrews Bill, which nullified the Northern Territory’s euthanasia laws and stopped the ACT from bringing in a similar scheme.

Ms Clifford said it was vital that Canberrans at least had the chance to debate the matter openly.

“Most people don’t know what I know, how uncomfortable, distressing, painful it can be, and I’ve seen so many relatives saying, ‘You wouldn’t let this happen to a dog’, and wanting the doctor to do something, but of course they can’t,” she said.

She was joined at the protest by fellow Exit member Geoff Millar, who has been living for some time with chronic obstructive pulmonary disease.

The 74-year-old said although his time wasn’t even nearly up, he wanted to know that he would have the choice at the end of his life.

“It’s a matter of one’s personal autonomy,” he said.

“I feel I should be able to make decisions about when I die, and although I don’t think it’s close, I can envisage a time when I will want to say that’s enough.

“I certainly don’t think I’m anywhere near even palliative care, which I’m perfectly happy to accept, but I don’t want to live a life which is devoted to palliative care and nothing else.”

He said comments from ACT Liberal senator Zed Seselja on Monday opposing the bill showed the importance of the democratic process.

“He’s my representative in the senate, and he’s saying ‘I know perfectly well what my constituency wants’, because he’s accepted that assisted suicide will be passed in some form,” he said.

“And if he knows that, then he’s simply being a bully by refusing to actively debate the issue.”

Fellow Exit member, 89-year-old Mick March, said he and his wife had long been passionate about wanting control over the end of their lives.

“To a person at the latter end of life, there’s nothing more reassuring if it were possible to have something in the cupboard which means that you can keep going as long as you want, but then you can leave if you feel like it’s time,” he said.

“The medical profession holds a fascination and a grip over the lives of many people, in terms of controlling what sort of treatment you can and can’t have. And many people are prepared to leave it to them, they think that palliative care is going to be good enough, and somebody else can decide how sick they are.

In my opinion that’s not quite good enough. I’d like to be able to make the logical choice of what that decision will be and when I should take it.”

“Unlike what Zed Seselja says, I know more about what’s right for my body,” he said.

“People can believe what they want to believe – he believes in an imaginary, murderous god to oppose people having a peaceful death. That is perverse. He really does need to resign, he really doesn’t represent the ACT.”